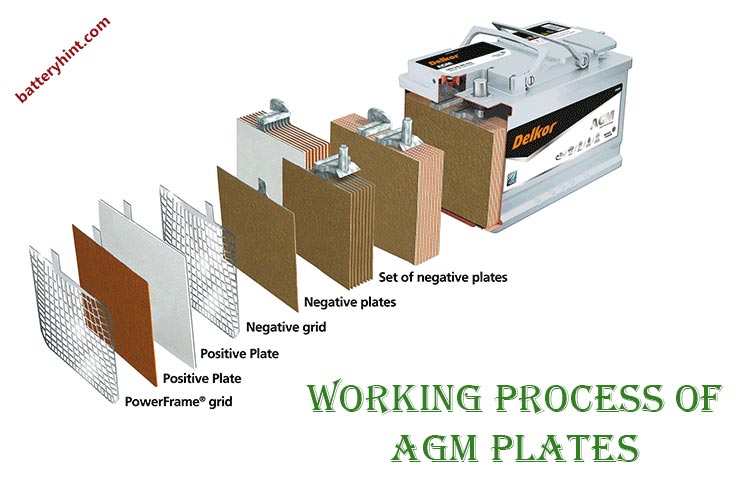 The working process of AGM plates

Very thin Lead plates are used in making the cells of the AGM battery. In order to understand the working principle of the AGM plates, the construction needs attention. This section thus shall answer the question of how to do AGM plates work.

AGM batteries have a unique form of cell in a very compact and closed structure.

The AGM battery works on an electrochemical reaction basis. Chemical energy is converted to electric energy. Electrons from the positive electrode otherwise known as cathode go to the electrolyte. These electrons flow through the cell and are received by the negative electrode. This maneuver produces electricity and completes a series of oxidation-reduction reactions.

Are AGM plates different from other batteries?

The plates used in the AGM batteries are different from the plates of the other batteries. There are 4 major types of batteries used widely. These are the Gel-filled battery, Absorbed Glass Mat battery, Li-ion battery, and the standard lead-acid battery.

In the AGM battery, the plates are made in a very thin formation. Therefore, a higher volume of lead plates can be used to make the cells of the battery. Besides, the lead plates are placed very confined in closed-packed structures.

There is another form of AGM battery that has spiral cells and electrode plates. These Optima batteries have higher vibration resistivity and spill proofing than flare plates.

Plates of the GEl-filled battery receive electrons from the silica gel-based electrolytes. This process is more effective than the AGM battery. Here, electrons are transferred through the absorbed electrolytes to the glass mat.

In the Standard lead-acid batteries, Lead-alloys are used as plates. Mostly Calcium or Magnesium are used to make the alloy plates. These are placed being dipped inside the liquid electrolyte. The structure of the plates is block-shaped with a relatively higher width. Whereas, in AGM batteries the very thin plates are used.

The amount of electrode plates in the standard battery is lower than the AGM battery. Moreover, the positioning of the plates is quite different. The cell chambers of the AGM battery act separately. Here, the plates, glass mat absorbing the electrolytes are compressed and attached to each other.

But for the Standard flooded battery, the electrodes are used as bars. The cell chambers are flooded with liquid electrolytes, and electron exchange takes place by direct contact between the electrolyte and the plates.

In Li-ion batteries, copper and Aluminum bars are used as the anode and cathode respectively. But for the AGM battery, both cathode and anode role is done by the Lead plate. That is why the charge holding capacity and power delivery of the Li-ion battery is higher than the AGM battery.

Comparing the sustainability of the plates, the AGM battery lags far behind. LEad is very harmful to the environment and for animals as well. These are rated as toxic. But, Li-ion battery plates are non-toxic and relatively more friendly than Lead plates. Recycling the Li-ion plates is easier than AGM battery plates.

This section reveals the answers to the questions asked by the consumers regarding AGM plates.

Do AGM batteries have plates?

AGM batteries have Lead plates. These act as the positive and negative electrodes inside the cell. There is an AGM separator in between the two plates which absorbs the electrolytes. The plates of the AGM batteries are very thin and made of pure Lead.

What is an AGM flat plate battery?

Plates in the AGM batteries work as the electrodes required for carrying out the electrochemical reaction. For different batteries, the plates act differently with different effectiveness. Even the material of the plates differs from each other.

If you are planning to repair or modify your AGM battery. Then it is imperative for you to know how do AGM plates work. Because without knowing that you can not buy the required amount of tools and accessories.