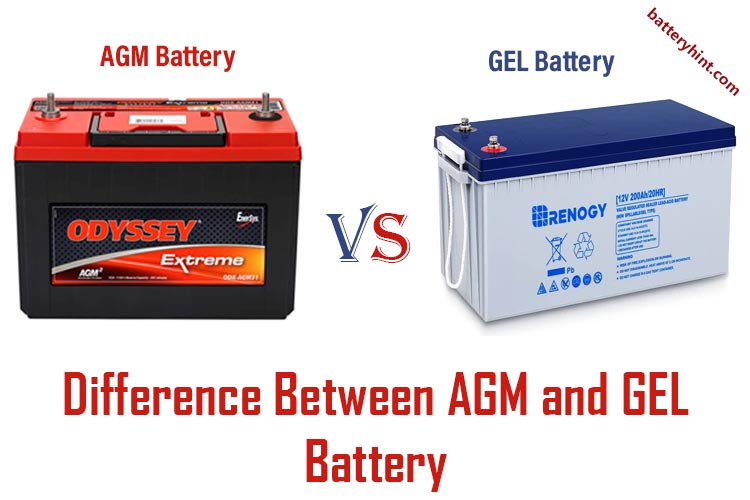 The major differences lie within the internal cell assembly, electrolytes, electrodes, and the external compartment construction of the batteries.

This chart states the main differences between the AGM batteries and the Gel batteries.

Are AGM and Gel batteries different from each other?

Both the Absorbed Glass Mat (AGM) batteries and the Gel batteries are based upon the Lead-Acid batteries. But there are lots of differences in their performance, construction, cell assembly, electrolyte state, etc. These differences will be stated in this section.

Does the AGM battery have a higher charge holding capacity?

In each cell of the AGM battery, two electrodes remain completely attached to the AGM separator. The positive and negative electrodes form a sandwich to keep the AGM separator in between. This soaks up the electrolyte and keeps it very stable in the absorbed state of formation.

Therefore, the charges during the recharging or equalization process are directly injected into the cell. There happens no loss of charge or flow of electrons. But in the gel batteries, balanced distribution of the charge cannot be done consistently. That is why the AGM battery has a better charge holding capacity than the gel battery.

Can the AGM battery be charged faster than the Gel battery?

The electrodes used in the AGM batteries are made up of almost pure Lead plates. Moreover, the plates are thin in dimension. This allows the accumulation of more lead plates inside the cell chamber.

On the contrary, in the gel batteries, the electrodes used are made up of alloys or impure lead plates. These lead plates are in the state of blocks. These are directly submerged into the gel-electrolytes.

Which battery has the minimum depth of discharge?

On the other hand, a gel battery can be used for a long time. It can reach upto 80% discharge rate. This means you can use the battery during extended emergencies. The gel batteries have an upper hand in this.

Which cell assembly of the batteries has more effectiveness?

In the AGM battery, the cells are assembled in a unique way. Two electrode plates are used which are cathode and anode individually. In between those, an AGM separator made up of thin fiberglass is placed between them. It absorbs all the electrolytes within and supplies the electron flow to the electrodes consistently.

Some of the AGM batteries had spiral cell chambers. The Optima batteries are made especially for extreme sports vehicles. Because these are very vibration resistant. Besides, no matter how much the internal compartment gets damaged, the sealing of the main battery chamber contains the leakage.

In which battery sulfation occurs more?

Sulfation is a secondary precipitation reaction that occurs in the battery cells. The free lead and sulfate ions react to form a layer of lead-sulfate on the negative electrode. This degrades the performance of the lead-acid batteries.

In the Gel-battery the electrolytes are not completely in the liquid state. It remains in gel formation. So the presence of the free ions is negligible in the gel batteries. That is why sulfation in the gel batteries occurs less. And so do not need to equalize the battery more often.

On the contrary, in the AGM battery, the amount of free ions is higher. And because the direct contact of the electrodes with the electrolyte causes sulfation to get discharged. You have to perform the battery equalization from time to time to your AGM battery.

Are there any similarities between AGM and Gell Batteries?

Despite having so many structural differences, the AGM and Gel batteries also have some similarities. The similarities can be found in both the performance and construction of the structures.

Both AGM and Gel batteries have enhanced longevity. Proper usage with regular charging and other maintenance can extend the lifespan of these batteries. Besides, the dual cell chamber along with the strong usage of the high-grade plastic-made compartment makes the batteries extremely durable.

The major drawback of the lead-acid battery was its leaking and spilling of the electrolyte while handling. But both in the AGM and Gel batteries the liquid is found in a non-liquid state. In the AGM battery, it is absorbed by the absorbent fiberglass mat and in the gel battery, the electrolyte is gel-based.

Along with that, the entire battery compartment is sealed shut. The edges and corners of the battery have no scope of leaking the electrolyte. Unlike the lead-acid battery, these do not need to be fed by distilled water from time to time. All these make the AGM and Gel battery completely spillproof. With that, even if the internal chamber gets damaged or ruptured there will be no leaking of the electrolyte.

The AGM battery has two structural types. These are the block-type cells and another one is the spiral cell. In both of these cells the electrodes, AGM separators, and the grids remain highly compacted and confined formation. And the electrolyte is completely absorbed by the fiberglass. That is why the AGM batteries are vibration-resistant.

Most of the extreme vehicles such as ATVs. dirtbikes, SUVs, and rally cars use AGM batteries. The gel batteries have semi-solid gel-based electrolytes. This keeps the battery stable and does not degrade the performance even in heavy movements.

The Cold-cranking Amps(CCA) is the high amount bursts of amperage for 30 seconds under the freezing temperature maintaining the voltage at 10V. It is an important feature for vehicular batteries to be used in very cold countries. Both the AGM and Gel batteries possess a higher amount of CCA.

Pros and Cons of AGM Battery

Like all other things, AGM batteries have some drawbacks and advantages over other batteries.

Pros and Cons of Gel Battery

The advantages and drawbacks of the Gel-battery will be stated below.

When should you use the AGM battery?

The AGM batteries are highly suitable as vehicular batteries. It can deliver loaded impulsive bursts of amperage even at low temperatures. Besides, the AGM battery is somewhat weather and temperature-independent.

Therefore, you are planning to replace or install a new battery in your car, pickup, motorbike. Then you get an AGM battery. You can also buy an AGM battery for your home inverter. Apart from that, golf carts, wheelchairs, and portable and motor-operated vehicles can use AGM batteries as the primary power source.

When should you use a Gel battery?

The gel batteries are more suitable for home uses. It can be used to power up the pumps, sump-pumps at the time of emergency. Besides, lighting up the portable home appliances can be done using the Gel battery. If you are planning to go on a picnic or camping you can get a gel battery for yourself.

More of that, you can install gel batteries in Recreational vehicles as well. The consistent power delivery and quicking charging system make it compatible with the RVs.

Which one will be better for solar? – AGM vs Gel battery for Solar charging

It is because the gel batteries have 400-600 times cycle life which is larger than the AGM battery. Gel batteries do not require much ventilation space during the charging process.

Because the amount of Hydrogen produced while charging reacts with oxygen to form water. AS a result, there is free hydrogen gas coming out from the gel battery. Comparing all these, teh gel battery can be a suitable choice for solar panels.

Which one will be better for the boat? – AGM battery vs Gel battery for Boat

For marine driving, AGM batteries can be a better solution. AGM batteries are a type of deep cycle battery. This works on the principle of the electrochemical oxidation-reaction reaction. but unlike the gel battery, the AGM battery has a higher power delivery. Gel battery is sensitive to high voltages.

It takes better charge than the Gel battery. And along with that, the charge holding capacity of the AGM battery gets the upper hand. This includes the spill-proof body design and anti-vibration resistant cell design as well. Boats in the colder region may require high CCA for firing up the engine. It can be provided by the AGM battery quite easily.

For these reasons, it can be considered that the AGM battery triumphs over the Gel battery for the boats.

In this section, we shall explore the frequently asked common questions about the AGM and Gel batteries.

Can you charge a Gel battery with an AGM charger?

You can charge an AGM battery using the Gel battery. Most of the recent battery chargers are made automated and smart. It can detect the battery type, state of charge, and sulfation rating. You will get all the options to select the battery specificity.

Along with that, the amperage rating can be altered as well. Since the AGM battery is sensitive to high voltage and overcharging, it is better to monitor the charging status continuously. With that, the real-time voltage reading should also be monitored.

What is the advantage of a gel battery?

A gel battery has enormous advantages over the former lead-acid battery. It doesn’t produce enough Hydrogen gas that builds up the internal pressure. Therefore, you won’t be needing an isolated space for charging up the gel battery.

Along with that, the gel battery is quite weather and temperature-independent. This battery is spill-proof, leak-proof, and resistant to vibrations or extreme movements. The Gel battery is popular for its stable and consistent power supplying feature. It has a wide range of applications and good compatibility with all portable heavy electronic appliances.

Can a dead gel battery be recharged?

A dead gel battery is unlikely to get recharged. But, sometimes the jump charging may lead to reviving the battery and holding the charge like before. It requires a healthy battery to be connected in parallel with the dead battery.

Then high amperage should be pushed while charging for about 1-2 hours. If the voltage reading in the dead battery increases then recharging in a usual way can revive the battery.

You must have a clear concept of the uses, working principle, power delivery, and charging process of the battery. Not all electronic appliances are compatible with all sorts of batteries. Therefore, you should know what is the difference between AGM and gel battery clearly. It is because you are willing to get a new battery to replace the existing one.