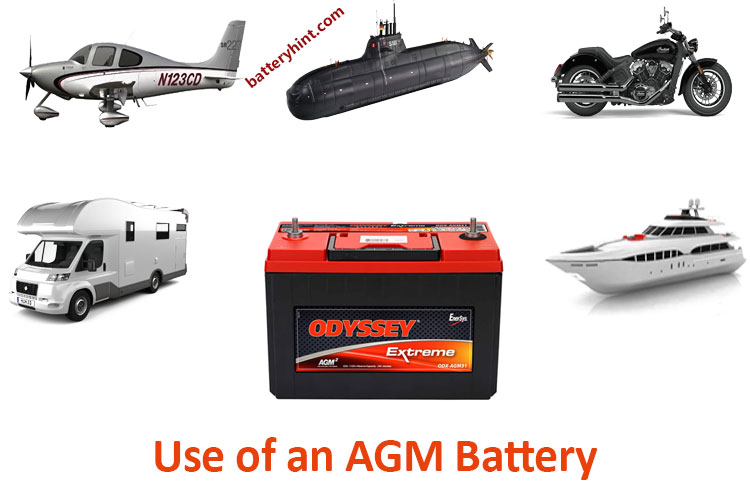 Lead-Acid batteries were introduced in the 1800s. Since then it has become an inseparable part of modern life. Absorbed Glass Mat batteries, also known as AGM batteries are the upgraded versions of the lead-acid battery. Here the question that arises is what is an AGM battery used for?

An AGM battery is specially made and designed for replacing conventional vehicular batteries. Though it works on the similar principle of the electrochemical reaction to produce energy. It has some different construction and engineering inside the battery cells.

This modification enhances the battery performance to the next level, especially for vehicles. The higher cold cranking amps from the AGM battery is an important contributing factor as a vehicular battery.

Is AGM Battery Different From Others?

Now Absorbed Glass Mat battery or battery has a similar series of actions for producing energy like the lead-acid battery. It follows the electrochemical reaction formally known as oxidation-reduction reaction to generate electricity. But there are some differences between other deep cycle batteries and the AGM battery.

Moreover, the lead-plates as the cathode and anodes are made in very thin formation. Therefore, more lead plates can be placed in the cell chambers of the AGM batteries. As a result, the longevity of the AGM battery is enhanced.

The cells of the AGM battery are made in different designs. Here, an AGM separator which is made of a fiberglass mat is sandwiched between the positive and negative electrodes. These electrodes are called cathode and anode. Outside the electrodes, a layer of grids is placed. This whole system is then compressed and packed together to form a single cell of the battery.

Unlike lead-acid batteries, the electrolyte does not reside in the form of liquid in the AGM batteries. The liquid dilute-sulfuric acid is absorbed by the fiberglass mat of the AGM separator. It happens like a sponge soaking up the liquid. Hence, only the required amount of the electrolyte is used while the electronic conduction. No waste or loss of effectiveness is seen.

In the AGM battery, you do not have to put distilled water from time to time. It is because there is no free liquid electrolyte inside the AGM cells. For this, the battery becomes a maintenance-free battery as well.

The entire battery chamber of the AGM battery is made completely sealed. All the edges and corners of the battery are made spotless and smooth. For internal pressure management, a valve is located on the top of the battery. This valve self-operated. That is why an AGM battery is said to have an advanced form of assembly in the vehicular battery history.

The applications of an AGM battery in different sector

An AGM battery has different usages as a portable powerhouse. Since it can deliver a high amount of power for a long time there are many applications of the AGM batteries which are stated below.

All engine-driven vehicles require an initial burst of amperage to start up the engine. The battery shoots an enormous amount of electric current for a very short time (2-4 seconds). It helps to ignite the engine and keeps the motor running using fuel afterward.

The AGM battery is the most suitable battery for this purpose nowadays. It is because AGM batteries have better and long-lasting power holding capacity. Besides, an AGM battery can possess more cold cranking amps(CCA) than those of conventional batteries. That is why these are more popular in cold regions.

Apart from starting the car, an AGM battery can keep the internal electronic appliances running smoothly. Such as the headlight, parking light, speedometer, radio, turn signals, etc keep operating using the power from the AGM battery.

An AGM battery can be connected to a power inverter for lighting up your house or office at the time of need. Inverters are electronic devices that convert direct current(DC) to alternating current (AC). Most of the home appliances work on AC current.

The inverters only transfer the power from a portable power source to the home. It itself cannot generate electricity. That is why high-capacity AGM batteries are used with the inverter. You can use an AGM battery for both household and industrial power supplies.

During an electric outrage, the sump pumps located in the basement may stop working. It becomes even worse if the power outbreak happens during storm heavy rainfall. At that time, pumping out the excess water becomes mandatory.

Here comes the play of an AGM battery. You can set up a backup sump pump that remains connected to the AGM battery. It can provide enough power to carry on the water pump for a minimum of 8 hours.

In other ways, the existing sump pump can also be connected to the AGM battery by circuit design. This will ensure uninterrupted water pumping without worrying about power failure. Unlike the standard lead-acid batteries, it is better to use the AGM battery because it is sealed shut and stores more power relatively.

The main purpose of the RV batteries is that they can power important electronic appliances inside recreational vehicles. Some common appliances inside the RV are the refrigerator, oven, lights, fans, TV, etc. These can run with one or multiple AGM batteries in parallel connections.

The AGM batteries are lightweight and maintenance-free. You do not need to flood the cells of the battery from time to time. Besides, its unique assembly and construction make the battery very vibration-free. As a result, you can take your RV to any adventurous and rugged area without any fear.

Its spill-proof technology allows you to do some sharp and hard maneuvers without causing any damage. Apart from the RV, an AGM battery can be installed in sports vehicles such as ATVs, dirtbikes, and rally cars for better effectiveness.

The AGM battery can be used as a portable DC source. For emergency cases, you can power up your battery to quickly power up the portable electronic devices. For temporary residence, the AGM batteries work well.

These shall keep the electronics up and running for a significant amount of time. Lamps,  LED lights, computers, TV, toys, etc can be charged and be given direct power for running those up.

Such appliances can be a toaster, waffle maker, induction cooker, microwave, oven, small refrigerator, etc. For these, the vehicular battery cannot give enough power. That is why extra AGM batteries are used to power those up for the whole 24 hours conveniently. This allows the chef to make delicious delicacies fresh and quick.

These motor-driven wheelchairs have a long range of operations. Because an AGM battery can have a long charge holding capacity with a quick charging facility. It can get charged up to 5x times faster than the standard batteries.

Golf carts are used by golfers to travel between the holes in a court. The distances are very long. A golf cart is a very lightweight vehicle. That is why it runs on the motor rather than the engine. To power up the motor, AGM batteries are used. It maintains the weight of the golf cart. Moreover, it can deliver enough power to keep the cart running for a long time conveniently.

The spill-proof and vibration-resistant features of the AGM battery get the job done more easily. As the golf carts need to face rugged and uneven surfaces, the AGM batteries make the perfect fit for them.

Camping in the wilderness is a fun activity. In modern days you cannot imagine camping or traveling without your portable electronic equipment. You will require mobile phones, camcorders, cameras, lamps, and other electronics to be fully charged all the time. That is why AGM batteries are used to power up the tents while camping.

It makes your camping experience more convenient as well as enjoyable. You will not have to worry about emergencies. AGM batteries are used to supply direct current to your tent. Using a portable inverter, an AGM battery is used to charge the small batteries as well.

In this section, we shall learn about the frequently asked questions regarding the uses of an AGM battery.

Can I charge an AGM battery with a regular charger?

You must use a voltmeter and multimeter to keep track of the battery voltage. Besides, it takes a long time to charge the battery to the fullest. Slightly overvoltage from the charger can damage the internal parts of an AGM battery. That is why an automated smart battery charger that has AGM specificity is recommended to use to charge the AGM battery.

What is the main disadvantage of an AGM battery?

The main disadvantage of the AGM battery is that it is very sensitive to overcharging. More than the required voltage from the charger can potentially damage the battery and degrade its performance. Besides, an AGM has a very low depth of discharge.

How long do AGM batteries last?

An AGM battery can last for 3-4 years normally. Depending upon the manufacturing brand it can stretch up to 5 years. But with regular maintenance and equalization such as recharging and desulfation will allow the battery to last about 6-7 years easily.

The modern world is dependent upon technological advancements. And, it cannot be imagined without vehicles and other portable electronic appliances. For these, the AGM battery has become mandatory for all. An AGM battery has a wide range of applications. This article answers the question of what is an AGM battery used for.

Virtually we cannot imagine a day without an AGM battery. Directly or indirectly it is connected to our daily life. A good quality AGM battery has the ability to serve the best electric purposes for you. Since it has more durability and longevity, with regular maintenance the AGM battery can be cost-effective as well.