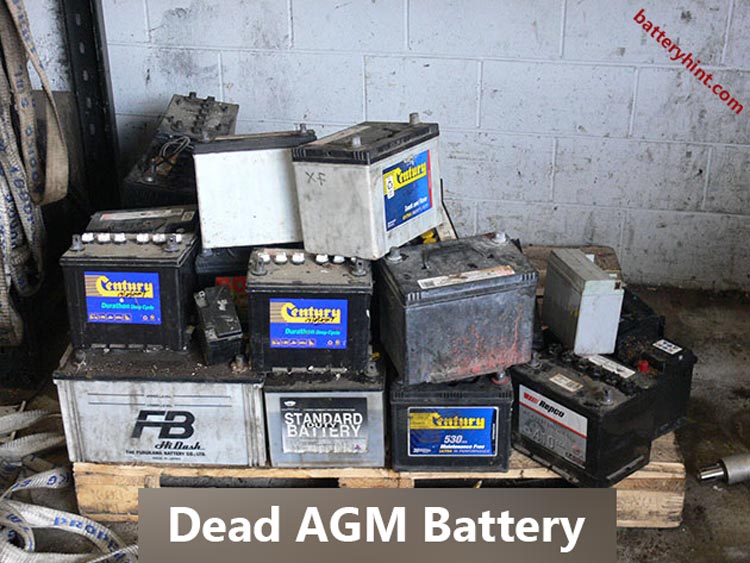 Like all other batteries, Absorbed glass mat batteries have a limited warranty. It dies or stops working after a certain period of time. There can be several reasons for AGM batteries being Dead early.

Due to internal malfunction, overcharging, or deeply discharged AGM batteries can die. Here, the question arises, what happens to an AGM battery when it dies?

It depends upon the method the AGM battery stops working. Sometimes you can restore the battery. But, if the battery is dead due to crossing its warranty limit, replacement is the only way for the dead AGM battery.

What exactly happens to your AGM battery when it dies?

The working power of the battery gets reduced to minimal when the battery dies. Here, the phenomenon is described as the AGM battery dying due to different reasons.

Overused Death of the battery

AGM batteries can die after a certain period of time. Its normal life expectancy is about 4-5 years. After that time, the battery slowly reduces the power output. You can see that the electronics are not working properly. The battery fails to hold a charge for a long time. The voltage suddenly drops after supplying a certain amount of amperage.

The AGM batteries are highly sensitive to overcharging. Due to the reduced surface area of the electrolyte, the extra amount of charge impacts the cells directly. It reduces the overall battery life. You will see abnormal power output behaviors if your battery is charged more than the normal time of charging.

Besides, overcharging the battery and exceeding the temperature can also damage the internal cell components of the battery. And, so you won’t be getting enough cranking power at the time of need.

After that, the charge holding capacity of the battery is disrupted. It quickly drops the voltage after charging the battery. Besides, you won’t be getting the cranking amps to start up your vehicle from a discharged AGM battery.

You will know if your AGM battery is dead or not by following some procedure.

Firstly, you have to fully charge the battery using the slow charging process. Keep a multimeter or a voltmeter attached to the battery. Take the reading continuously. The voltage shows the state of charge of the AGM battery. When fully charged your battery should show 12.6V or higher.

But, if it shows voltage below 12 then the battery health of the battery is said to be bad. Moreover, the battery failing to show voltage above 11V means your AGM battery is completely dead.

While running the test, the AGM battery voltage should not drop below 10V. Maintaining the voltage between 10V means the battery is good. But, if your battery voltage during the stress test falls below the line, then it is considered to be dead. Many testers have pre-installed programs to determine the battery life. It will say about the battery’s health after the test.

Even after charging your battery at higher amperage for a long time, the voltage reading does not exceed 10.5V. Then the battery is considered to be dead. Because charge from the battery charger is putting no impact on the charge level of the battery. It means the AGM battery itself is failing to receive the charge.

Can you bring back a dead battery in life?

There is no certainty that a dead AGM battery can be revived. If the battery has completely dried out cells due to overcharging at higher voltage then it is not possible to restore the battery. But for a deeply discharged battery, kick start can be performed which may revive the battery.

You can perform jump-starting the battery which may actually revive the battery from dead. Complete disassembly of the battery and repairing of the cells should be done manually to activate the battery. But this process can be done only by professionals only. Dried-up cells may require flooding with acids to restore the battery.

How can you bring your dead AGM battery to life?

There are several ways to restore your discharged and dead AGM battery. Follow the steps to get your battery revived.

This process requires a secondary AGM battery. This battery should have good battery health. Besides, you would need a pair of jumper cables and a voltmeter, and a smart heavy-duty battery charger.

Another common method to restore the battery is heavy charging with maximum electronic input.

Are there any ways to use your dead battery?

Batteries are not sustainable. It is a great threat to the environment and the ecology. Especially the electrolyte and the leads used in the battery have high negative impacts on the battery. Fortunately, every part of the battery is recyclable and reusable.

The lead plates of the battery can be isolated and reused to produce new batteries. Moreover, it can be used for metal alloys as well. The lead plates are quite heavy and have good usage in making the ammunition, pigments, lead wires, etc.

Its plastic casing y is also recyclable. After following proper protocol and refining the casings can be used for making new batteries. You can call the nearest retailer of the battery. They will offer you the exchange. You can get special discounts on buying a new battery in exchange for giving away the older one.

The unused sulphuric acid of the battery is neutralized with an equivalent amount of base. Then sodium sulfate can be prepared which acts as a good salt and fertilizer.

This section explores the queries about dead AGM batteries and their disposal or reviving methodology.

What happens if you charge an AGM battery with a normal charger?

Normal chargers do not have any charging profile. It just delivers raw uncontrolled voltage to the battery. You can charge the AGM battery using a normal charger. But, you must keep an eye on the voltage output and State of charge of the battery continuously. Because overcharging may damage your AGM battery.

How to resuscitate a deeply discharged AGM battery?

You can restore your deeply discharged AGM battery using the jump-starting method. It requires a good battery though. Otherwise, direct heavy charging from the smart charger may revive your battery.

How to tell if an AGM battery is bad?

Checking the voltage reading from the battery will let you know about the State of charge of the battery. Lower voltage indicates that your battery is dead. Besides, doing load tests allows you to know the status of your battery health.

We attached a tutorial video about – how to restore a Dead AGM Battery. Follow the video if you need to restore an AGM battery.

Since all types of batteries have a limited lifetime. They stop working after a certain period of time. Therefore, if the warranty reaches its limit you can perform some maneuvers to restore the dead battery. It is worth a try because many times deeply discharged batteries get revived.

But, if the batteries are dried up and dead, then you can safely dispose of them or use them to recycle. Moreover, you can exchange the battery with the manufacturer to get discounts in return. This shall help you to save some bucks while getting a new AGM battery for your vehicle.