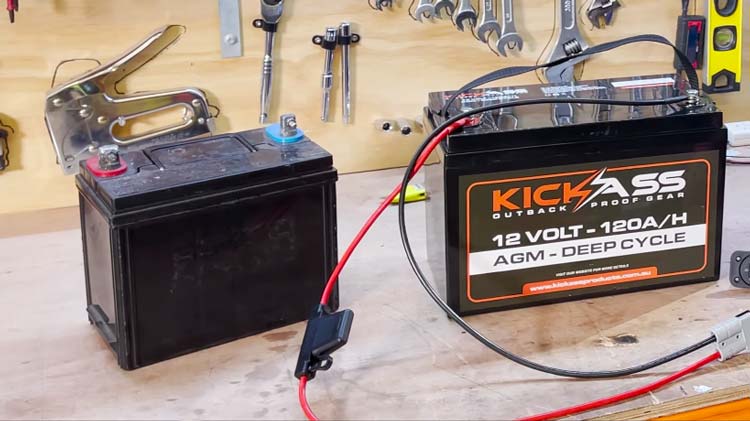 AGM batteries also require maintenance like typical lead-acid batteries. But, they don’t require any dedicated maintenance for which you should acquire professional knowledge. Taking care of your AGM battery is compulsory unless you want to lose it before its expected lifespan.

So, how do you maintain an AGM battery? First, you need to focus on proper charging. Along with using the right charger, you should follow the strict charging interval. Prevention of sulfation and stratification are other significant parts.

There are some reasons that cause the AGM battery to die soon. Faulty storing and installation processes are the most common of them. Once you’re concerned about maintaining the battery, you’ll magically see the improvement in battery performance.

Do AGM batteries need any maintenance?

AGM batteries are maintenance-free doesn’t mean you should treat them with negligence. Along with properly storing the battery, AGM batteries require proper charging. The lifespan, as well as performance, will decrease if you overcharge an AGM battery. AGM batteries also need sulfation prevention and use recommended chargers only. There aren’t any maintenance suggestions for your AGM battery except for these.

What causes AGM batteries to fail?

AGM batteries and general lead-acid batteries have almost similar reasons for failure. Some of the top reasons behind AGM battery failure are discussed below.

Neither hot temperature nor cold temperature is good for AGM batteries. When the temperature is high, the battery will expel more energy than normal. That means the discharge rate won’t be satisfactory.

Cold weather is also troublesome as it leads your AGM battery to freeze. Most severe battery failure is caused due to extreme cold weather. A problematic temperature is risky for the lifespan of an AGM battery.

On the flip side, charging an AGM battery with too high voltage increases the self-discharge rate. Also, it accelerates corrosion and leads the battery to fail.

There are several things to consider before storing an AGM battery. First, the storing place should be dry and devoid of unnecessary moisture. Secondly, store the battery with 100% charge. It’ll help to prevent self-discharging rapidly.

Most importantly, storing an AGM battery at an ideal temperature is mandatory. The storing place should be around room temperature if possible. When any of the aforementioned storing processes aren’t followed, your battery will fail sooner or later.

A faulty installation process may lead your battery to extreme damage such as fire. Even the battery can explode. Connecting the positive cable to the negative post is the most common battery installation fault. Sometimes, the faulty connection is also responsible for AGM battery failure.

How do you maintain an AGM battery for a longer lifespan?

Use the right charger

You can easily identify the latest charge of your AGM battery. Voltage indicating digital monitors, hydrometers, and amp-hour meters are used to determine the charge. The charging condition won’t be similar for the right charger and wrong charger. Using the right charger allows your battery to hold a charge for a longer time.

Sulfation is a process that isn’t wanted by any battery owner. This process is occurred due to keeping the battery uncharged for a long time. Once sulfation occurs, it’s too late to save the battery. Therefore, you should focus on prevention as prevention is better than cure. Ensure a period charging cycle for your battery to ensure its highest health.

Stratification is a disaster that occurs for partial charging and discharging of an AGM battery. This process creates a chemical imbalance inside the battery. As a result, the battery can’t perform to its fullest potential. After a certain time, the battery will be damaged permanently. Never let your AGM battery charge partially to prevent this trouble.

Cooling off period is essential for the longevity of a battery. Periodic recharging may make the battery hot. Charging the hot battery isn’t the right choice considering overall safety. Along with grid corrosion, it may lead the battery to complete failure. Better, let the battery decrease its heat and recharge it later.

Equalization is an extended, low-current charge after performing a full charge to an AGM battery. This process helps to ensure a normal charging cycle month after month. Until your AGM battery is periodically equalized, its cells aren’t balanced. That means your battery has a high possibility of performance deficiency and partial failure. Periodic equalization should be performed carefully with the help of experts.

Now, this part will reveal some most asked questions about the AGM battery as well as answers.

How long can you store AGM batteries?

AGM batteries may die after several years if they’re not properly stored. A full-fresh AGM battery with proper charge and temperature can be stored for up to six years. AGM batteries have a self-discharge nature and so checking their battery level from time to time is recommended.

How often should I charge my AGM battery?

Despite storing the battery and using it, you should charge your AGM battery after every six months. Charging an AGM battery before storing is mandatory and its charge level should be 100%. When the charge is below its desired voltage level, you can charge the battery.

Do AGM batteries need to be kept charged?

Yes, it’s because AGM batteries have a self-discharge nature. Its internal chemicals react even if it’s in idle condition. AGM batteries don’t have extremely high discharge rates. Therefore, store it with a full charge and recharge it when it’s below the recommended voltage level.

You’ve already understood the right process to maintain an AGM battery. Also, you have a clear conception of the problems of ignoring the maintenance of AGM batteries. AGM batteries tend to discharge slowly. Therefore, proper maintenance is the key to its highest longevity.

It’s never hard to maintain an AGM battery with your fullest effort. All you need to do is ensure an ambient storing temperature. Besides, you need to keep the storing place dry forever. If you’re going to store the battery, then perform periodic equalization.

The most common AGM battery failure reason is using an inappropriate charger. This endangers the battery’s performance on a larger scale. Maintaining the AGM battery also includes determining the charge level and liquid level regularly.